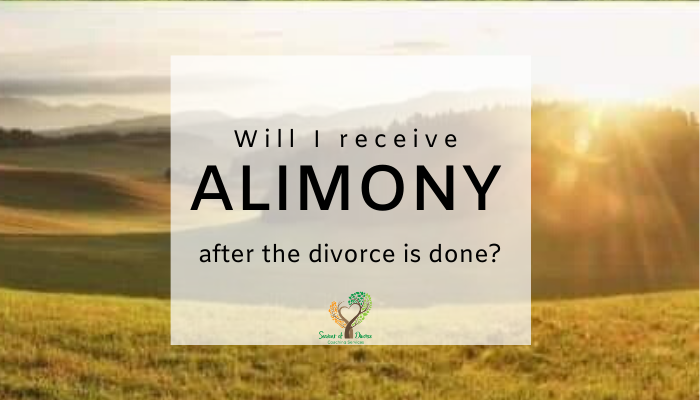 I’ve been married for over 30 years. I worked to support him in getting his college degree. I raised our 2 children and supported his business by working there. The household chores and financial responsibilities were taken care of for over 30 years by me. My divorce lawyer said I’d receive alimony.

I had to work as a real estate agent just to have extra discretionary income, which was not appreciated. Everything I did was unimportant. It didn’t matter.

If he had decided to not pay maintenance, he could retire after a while. Even if I got awarded maintenance didn’t mean the money would come. It’s the same with unpaid child support.

Alimony, or maintenance, is the financial support awarded from one spouse to the other after the end of the marriage. Different states use different terms, but they are legally the same things.

With no-fault divorces, alimony seemed like it was more of a punishment to the payer. Like the name change from divorce courts to family law, alimony had a similar negative sound that the legal system is trying to drop.

Will I receive alimony?

That depends. We used to expect women that had been married for a long time, raised children, and didn’t work outside of the home would receive maintenance.

I had all the checkboxes checked. I was going to get a large amount of money on a regular basis. He wanted to pay a smaller lump sum payment instead. I had the judge decide since we didn’t agree in mediation.

He could return to court to have the alimony payments adjusted if he retired. At 50, how am I going to go and start over a career when I have invested all my efforts into our family. His small payment was just not reasonable.

Alimony is cut off if you remarry. That’s the normal maintenance limitation.

Well, In hindsight, I shouldn’t have done that because the judge gave me nothing. Even though I had all the big boxes checked. My divorce lawyers advised me that if the judge didn’t give me a reasonable amount of maintenance, I’d have a good case for appeal.

It’s hard. I know this also happens to women even in their 60s and 70s. It happens to many, many people I know. I really get upset about it on their behalf because they’re not prepared for it.

This is why I became a divorce coach. It’s disturbing to think of what can happen in the family court system. There is hope here but you need to know these things.

Should I appeal the alimony decision?

I went to appeal and they just agreed with the family court judge. So I went through a lot of time and money. Nothing when I could have gotten it resolved and over within mediation If I had known.

So there’s the problem. Even if your attorney says so, it doesn’t necessarily mean that it’s going to happen. So you need to be aware of that.

But anything that’s decided in a divorce court is at the judges’ discretion. And they can support their decision if they want to because there are very few people that are going to hold them accountable for it.

Because the reality is the whole family court system is made up of attorneys and judges that all support each other. They don’t backstab usually. It’s even worse if you’re in a small district because you don’t have many people to complain to.

There’s a documentary called Divorce Corp. It’s an eye-opener and it’s disgusting. Judges have thrown people in jail for saying anything about what they’ve done to their family. It’s unjust and it’s sickening. It’s really, really bad.

But that’s the reality of it. None of us have any clue until we’re in the middle of it.

No matter how bad the divorce process seems, the best situation is in reaching an agreement during your mediation. If that isn’t an option, regardless of what your divorce lawyer says, you may find yourself without any alimony in the end.

Not sure what other issues might come up in your divorce case? Get a list of the questions to ask a divorce lawyer sent to your email.